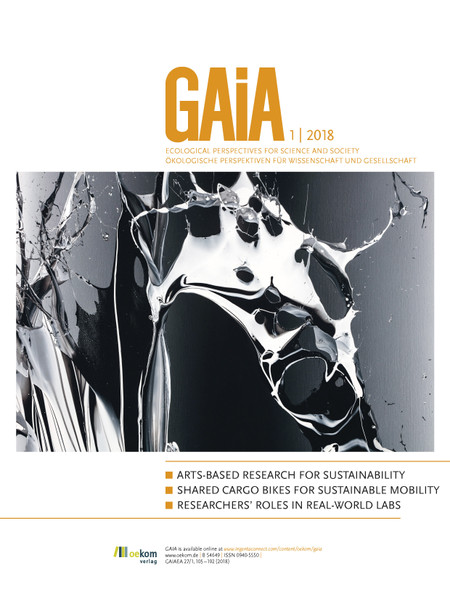 KATRIN FRIDRIKS: COVER AND FEATURE IN GAIA – ECOLOGICAL PERSPECTIVES FOR SCIENCE AND SOCIETY

Katrin Fridriks' art was chosen earlier this year for the cover of GAIA, the prestigious academic journal that concerns itself with environmental and sustainabilty problems and solutions. Fridriks' work is the outcome of finding the perfect balance between controlled and wild kinetic energy and ranges from steely monochromatic colour ways to the vibrant colour-rich. As natural scientist Loftur Reimar describes it, “She makes abstract phenomena such as speed, gravity or growth tangible.“ The unpredictable and dynamic patterns featured in her pieces are reminiscent of the contour lines on a map and are indeed inspired by the extreme geography of her home country, Iceland.

The Icelandic influence is evident not just visually but also in the political message of her work. In Waste, Fridriks most recent installation at Circle Culture, her artworks address ideas of reusability, sustainability and environmental waste. There are many innovative examples of waste being repurposed in Iceland, e.g. the luxurious Blue Lagoon, which was formed as the result of the output of a nearby geothermal power plant pooling on a lava field near Reykjavík. Pieces in Fridriks' Waste installation were once considered waste themselves. Fridriks' creative process is highly physical – she takes days to prepare and choreograph certain ways to splash and throw paint on a canvas in exactly the right manner. She creates stunning pieces of work through this method where a lot of paint ends up on the floor. Rather than clearing the remnants away, Fridriks has recognised their aesthetic potential and given them an artistic purpose of their own. In the words of art critic Klaus Speidel, Fridriks declares “waste to be worthy of aesthetic attention“. Thus, Waste speaks not only of Fridriks' own hopes of a greener future where waste is valued and repurposed rather than just discarded, but it also becomes a mouthpiece for Iceland's environmental aims, so it was only appropriate that the installation was opened by the Icelandic Foreign Minister Gudlaugur Thor Thordarson.

Not only was Fridriks the cover artist of GAIA but her work also features in the article 'Sustainabilty Science with Ozzy Osbourne, Julia Roberts and Ai Weiwei' in the same issue. The article itself, written by Harald Heinrichs, professor of sustainabilty and politics at Leuphana University Lüneburg, is well worth a read. It discusses the development and importance of arts-based research methodology as it pertains to environmentally sustainable development. Fridriks' work is used as an example to highlight how successful Fine and Performance Art can be in bringing environmental issues to the forefront of general popular discussions. The article argues that art and artists have the potential to play a seminal role in finding solutions to protecting our environment, and we at Circle Culture agree.

When viewing work by Katrin, I am reminded of Hegel, who explained beauty as the spiritual making itself known sensuously. She makes abstract phenomena such as speed, gravity or growth tangible. Experience of art takes us to a different dimension, akin to the reality beyond, the realm of the mystic. As the Persian sufi poet Rumi wrote: “Somewhere between right and wrong, there is a garden - I will meet you there.”

For her new project, Katrin Fridriks transforms leftovers into works of art, declaring waste to be worthy of aesthetic attention. What was a by-product of artistic creation thus becomes its product. Such a reframing more naturally relates to Marcel Duchamp’s Ready-Mades than to Jackson Pollock’s All-Overs. It is more common in conceptual art than in expressionistic painting. Each of the little pieces is a trace of a larger work, which it indexically evokes. But each of them is also a microcosm in itself, a work in virtue of the artist’s intentions. We could call them micro paintings. Each micro painting is born twice: once when Fridriks works on a large canvas, and some of the paint splashes on the floor and a second time when she decides that a splash is worthy of appreciation in and of itself. But her reframing does not only connect this new series to conceptual art. It also evokes methods from outside the art world, for instance: Lateral Thinking, used to induce new ways of seeing and systematically generate innovation through a change of perspective. What if…, lateral thinkers like Edward de Bono ask, …we drilled for oil from below rather than above. What could this mean? The conceptual drive in Fridriks’ works, which has been manifest in her titles for many years, is not purely conceptual. It is consciously political.

More information about the artist